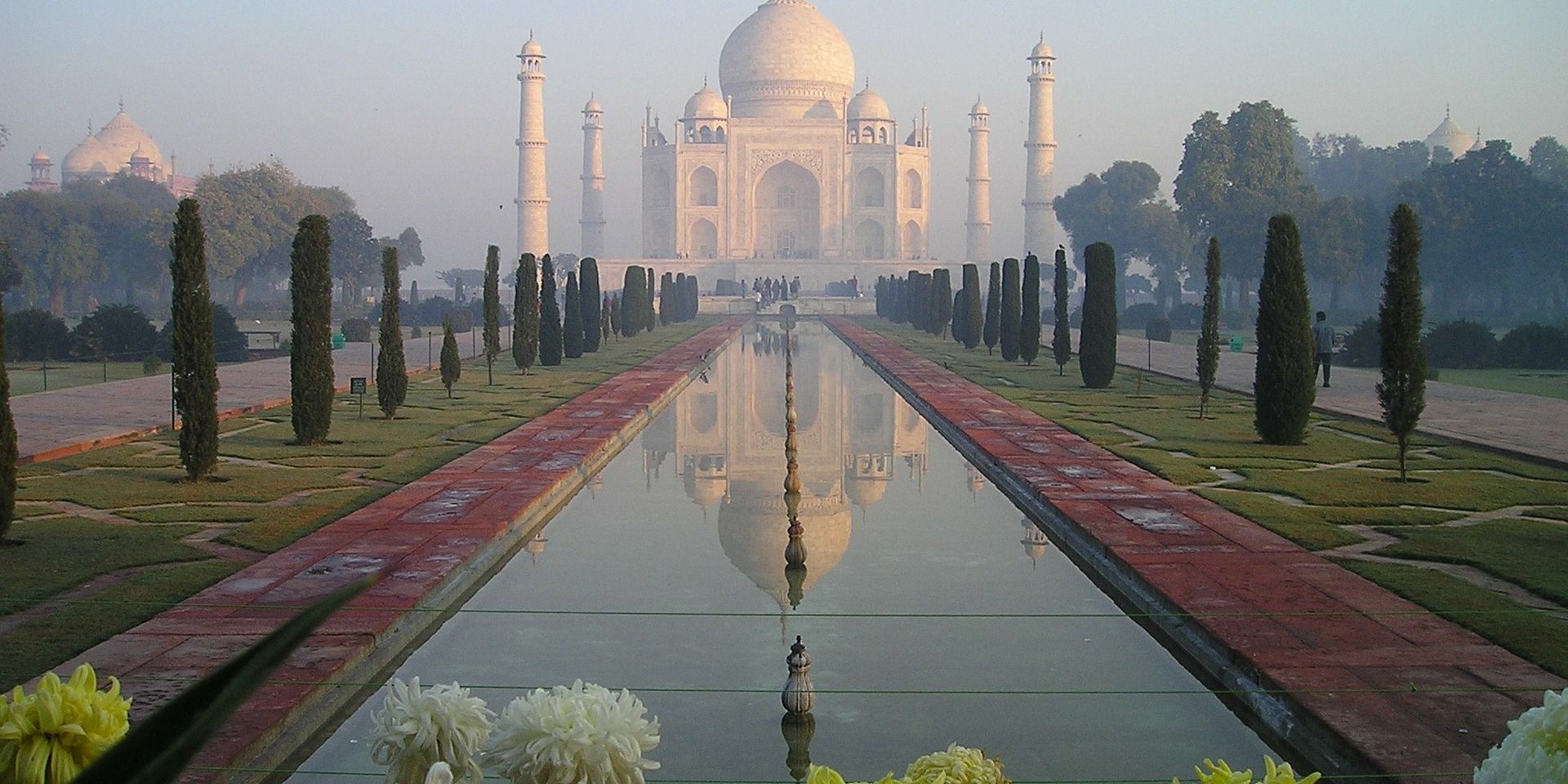 Early - a cold morning (well it is still their winter) - and quiet roads. The odd beggar is still asleep on the pavement as we make our way to the station to catch the non-stop Gaatimaan Express to Agra. Having seen pictures of Indian trains, we are a bit sceptical about our booking in "executive" class and hope that we'll at least be inside, but that remains to be seen! Not reassured by the teeming crowds around the entrance, porters with their numbered metal armbands trying to take our luggage and beggars demanding food, we at last reach our platform where amazingly, all is  calm. Busy, yes, but like all non-familiar stations, there is an air of suppressed excitement (but maybe that is just us).

And here comes the train - and it's on time. Our carriage is clean, air-conditioned and with breakfast included we are looking forward to arriving in Agra in approximately one and a half hours. No hanging outside for us!

We are only a few minutes late arriving into Agra.  Stepping again into seething humanity, and handing the remains of our packaged breakfast to two little girls, we meet our driver VJ who will be with us for the rest of our journey. Our hotel for the next 3 nights seems like an oasis of luxury and calm and yet again, contrasts hugely with the lives of most Indians outside the gated and guarded entrance.

And finally, we visit the Taj Mahal. Is it as awesome as everyone says? Without doubt.  You must go.  I urge you to see it for yourself.  I'm not going to tell you any more. With that in mind, here are some lesser-known facts to compensate;

It was the first mausoleum to be built for a woman, Mumtaz Mahal,the favourite and third wife of the Mogul emperor Shah Jahan. She bore him 14 children in 19 years and (unsurprisingly) died in childbirth;

The garden tomb is said to represent the Islamic garden of paradise costing, 40  million rupees and 500 kilos of gold;

The architect was Persian, but an Italian and three Englishmen also submitted designs.

The marble is a veneer stuck on with a cement-like substance harder than superglue.

The Taj rests on a foundation of teak and stone-filled  wells, each covered with a dome and able to act as shock-absorbers in an earthquake;

You enter the garden complex through a gate deliberately made in sandstone so that the first glance of the gleaming marble tomb offers a stunning contrast;

Most visitors like to sit on the marble "Diana" bench in front of the Lotus pool, taking camera shots and selfies while ignoring the glorious Taj reflecting in its waters. (Reader - I confess !! We sat on the bench too);

Each of the four minarets surrounding the tomb complex is 40m high;

The dome topping the tomb is crowned with a bronze u-shaped finial signifying a blessing in new ventures;

The craftsmanship seen in the decorative marble panels, in calligraphy Koranic script and in the many carved walls inlaid with precious stones, has passed on to families today who can trace their lineage back to the original stonemasons.

Heading back to the hotel, we reflect upon the fact that the Taj Mahal really is an extraordinary monument to enduring love.

We set off after breakfast to see the red 16th century sandstone fort situated on the west bank of the Yamuna River. Originally built for defence, it had by Shah Jahan's time become a partial palace with marble and gilded areas.  He lived here until his death, and was even imprisoned by his own son for 14 years, but always overlooked the Taj where his beloved lay. After his death, he was buried beside her but, as his status required, on a raised dais looking down at her.

And now we are back in the car, on our way to the walled town of Fatehpur Sikri, once the Mughal capital for 14 years. With its blend of Hindu and Islamic styles it is said to reflect Emperor Akbar's secular vision and style of governance.  He built the city in honour of the Sufi Saint, Salim Chishti and here is the interesting story taken from one of the information boards:

"The Shah (or Emperor) did not have any sons but a wise priest (a sufi ) travelled some distance from his home to say that a new wife would bring him a son. After the heir had duly arrived, Shah Akbar wanted to build the sufi a mosque in Agra but the Sufi insisted that it be built in his home village."

And so the mosque and the walled city began and has now become a place of pilgrimage. Covering my head, I walk around around his tomb where "wish" threads are tied and where he lies covered by gifted pashminas. Like many places in Rajasthan, I could bore you with many details of this amazing complex but, as above with the Taj, I will list only a few things which I found particularly interesting:

The massive entrance courtyard has a stone ring embedded in one of its sections. Some say that an elephant was tied here, kept to trample scoundrels. Our guide said that it was probably for tensioning the massive ropes attached to the awnings which would have kept the sun off the surrounding courtyards: I will let you choose which version you prefer!

The Shah's raised sleeping platform in his private sleeping quarters was surrounded by water channels and the walls were insulated with couscous on which water was again poured;

Concubines may have been chosen by playing a game of human snakes and ladders in the Pachisi Court;

The pool of Anoop Talao, associated with the court musician Tansen was where the ladies would swim in rose-petalled water;

The deer tower or Hiran Minar is believed to have been a memorial to Akbar's favourite elephant.

The main mosque is still in use today and of course, heads have to be covered and shoes left outside as we enter. I am sad to say that I welcomed the quietness and the lack of aggressive beggars inside. Some of the children were especially skilled, using a huge variety of languages to entice the tourists. Our guide Rigzin, told us to ignore them, but one particularly persistent little boy couldn’t be ignored and his smile said it all as he clutched our meagre offering for the proffered postcard.

Thankfully we make it back to the hotel before the heavens open. Pity the poor tourists still at the Taj.  Tomorrow we are off to the pink city of Jaipur…