It was raining.  It was cold.

So cold, we had to buy hoodies from a road-side stall which was doing a roaring (and unexpected trade) in them.  We were having breakfast next to a beautiful crater lake, overlooked by a volcano, about an hour north of Ubud on Bali.  We were told it was beautiful, but visibility was zero because of the rain and mist.  And did we mention it was cold?

Not the most auspicious of starts for our cycle through the mountain villages, but our expert TT guide, Bagoes was nothing but hearty and encouraging.  As we took to our bikes, the rain stopped and the sun began to put in a tentative appearance through the heavy clouds. 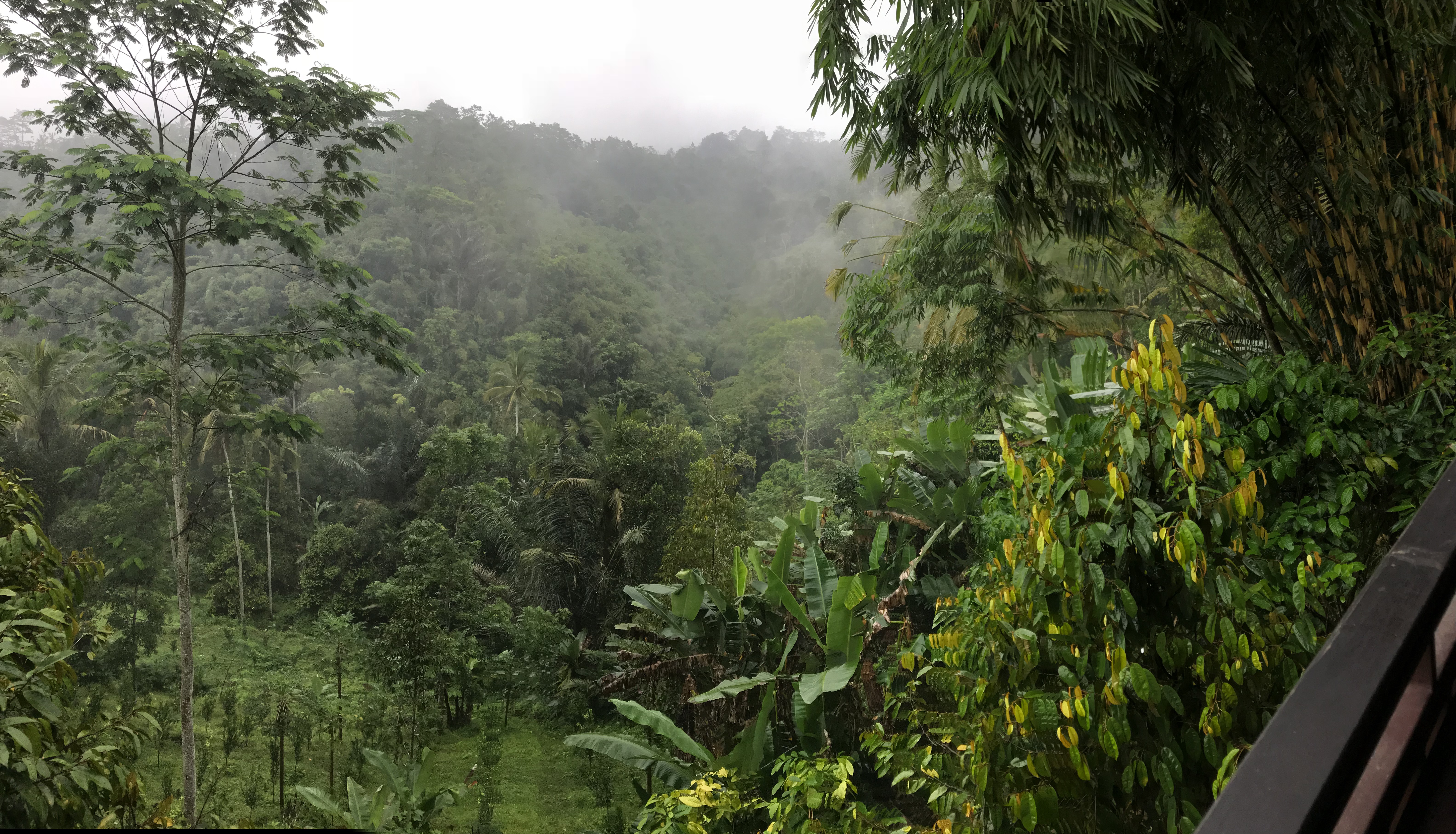 The view was spectacular, even more so in the heavy mist.

We were on our bikes for about 10 minutes when Bagoes signalled for us to stop next to a small community. We could see lots of bamboo ladders and what looked like a hive of crafting activity. 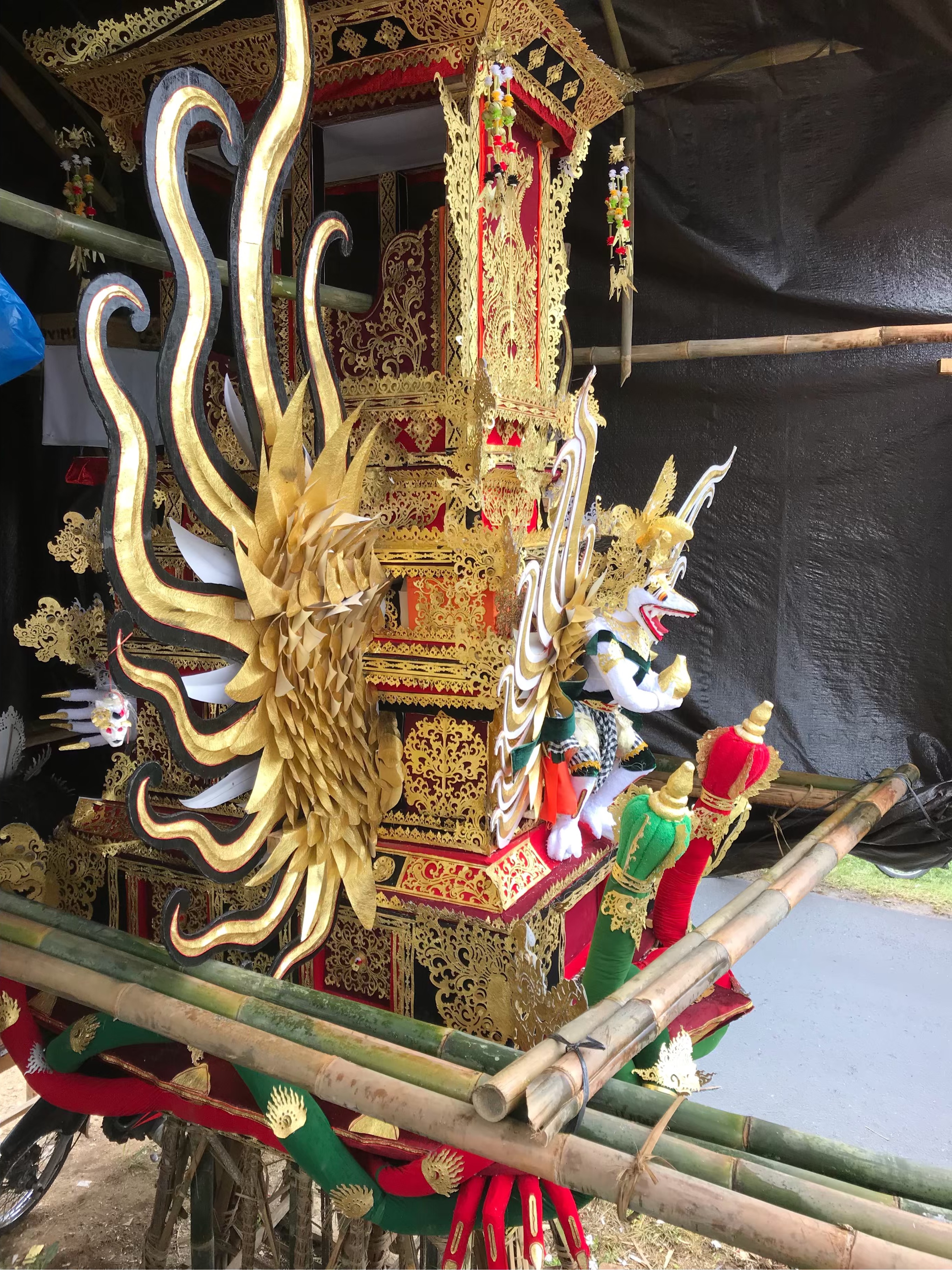 Bagoes explained that in Hindi communities such as this one, it was too expensive to cremate someone on an individual funeral pyre when they died.  Instead, they buried the dead, and roughly every five years, the whole community 'chipped in' to hold a mass cremation, after first exhuming their dead. 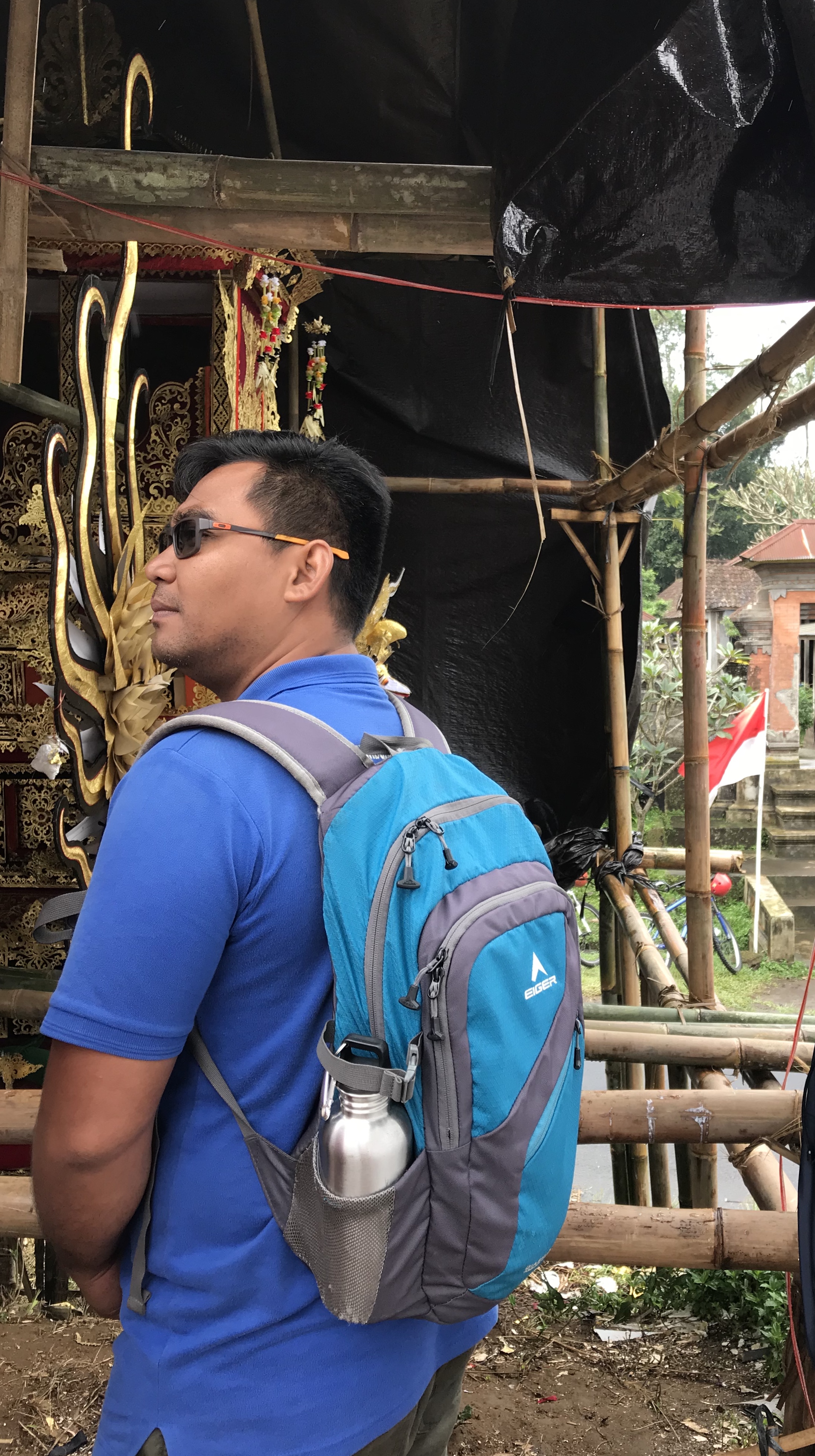 Therefore, what we were witnessing was a rare event, and we were privileged to witness the preparations.  We could see the ornate frame which was being built to carry the dead to their cremation site, and also the life-size bulls and horses which had also been made to accompany them (see main image).  Bagoes (right) explained that in his village, they made winged horses to accompany their dead, as that was their family's talisman.  It was both fascinating and macabre, and made us realise that in our community, death is sanitised.  The matter of fact way Bagus talked about death, and the celebration of life and death which occurred, really made us reflect on our own experiences. 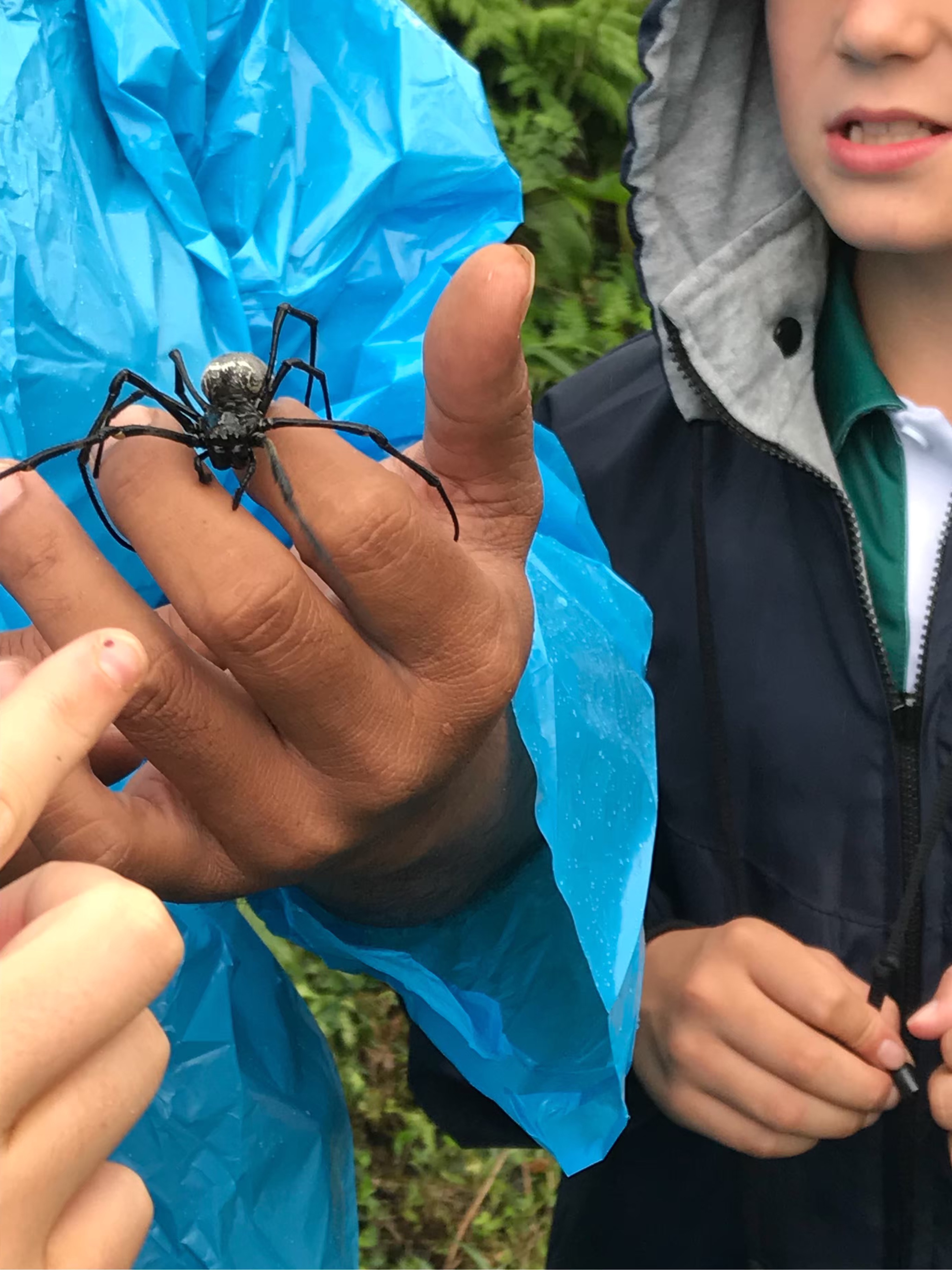 As we moved on from the village, winding our way downhill, we stopped at a web of spiders, which Hagrid would probably be friends with.  The ever chirpy Bagoes grabbed one off a web, handling it in the way you would a family hamster. That was fine until one of the young TT members took up the offer to handle it, fumbling the pass, with the spider landing on my foot.  I hate spiders and this spider was HEAVY.  I could actually feel its weight on my trainer. Bagoes to the rescue and we continued our journey. 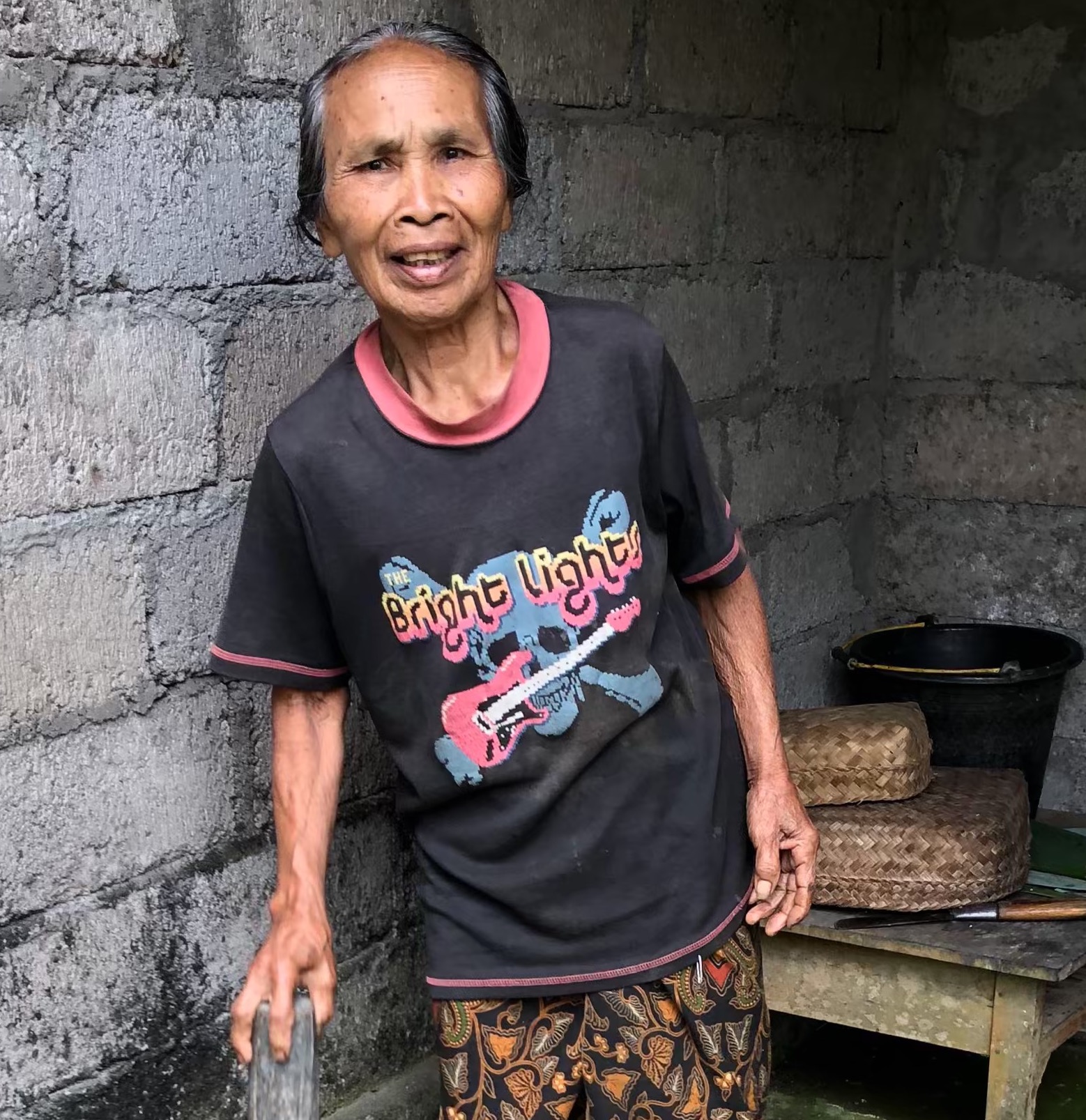 Our next stop was a very traditional family compound. In line with Tribal Tracks' policy of giving back, in exchange for allowing people to visit their compound, the family receives a sum of money monthly, which allows them to buy extra livestock. Even so, just a few miles away from the 5 star luxury retreats in Ubud, it was sobering to see the contrast.  The family cooked on a traditional open fire, cleaned their teeth at a standpipe, and lived in two simple huts, adjacent to their family temple.  Behind this lay two small fenced off areas, containing their cows and pigs.  We were lucky enough to meet 'Grandma', who was able to show us how they lived and demonstrated the morning cooking process, which would last the family for the rest of the day.

Carrying on, we passed through several small villages, returning the waves and greetings of the children who rushed out to see us.  We also had to avoid the sleepy dogs, some of who decided to have a mid-morning nap right in the middle of the track. 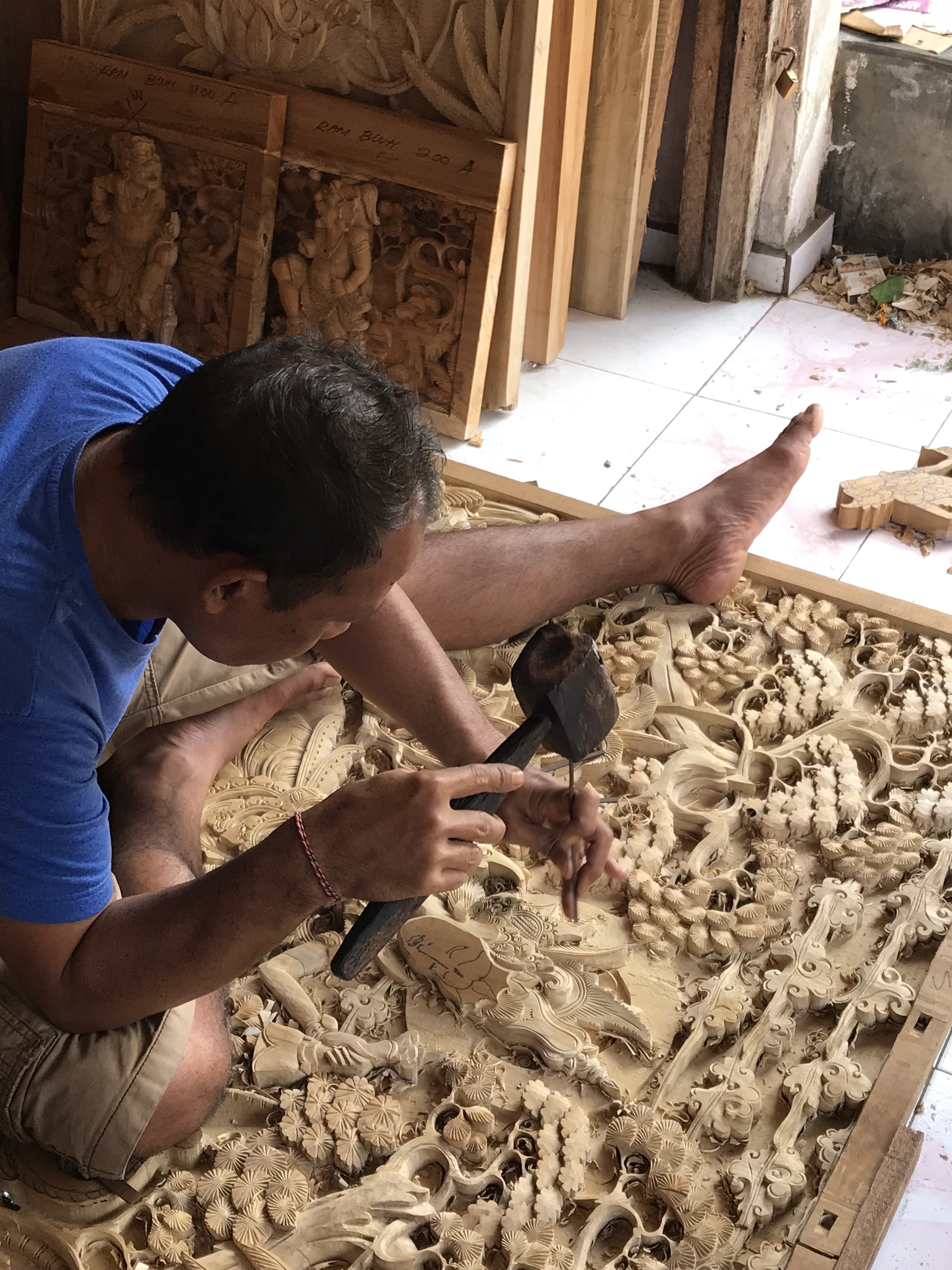 After a while, we stopped to see two traditional carvers, who were commissioned by the local temples to create beautiful works of religious art.  A simple carved fresco would take one man two weeks - the more complicated one we saw had taken nearly three months.  We learned that the skill was passed down from father to son, uncle to nephew, grandfather to grandson, keeping the traditional skills alive within each family. 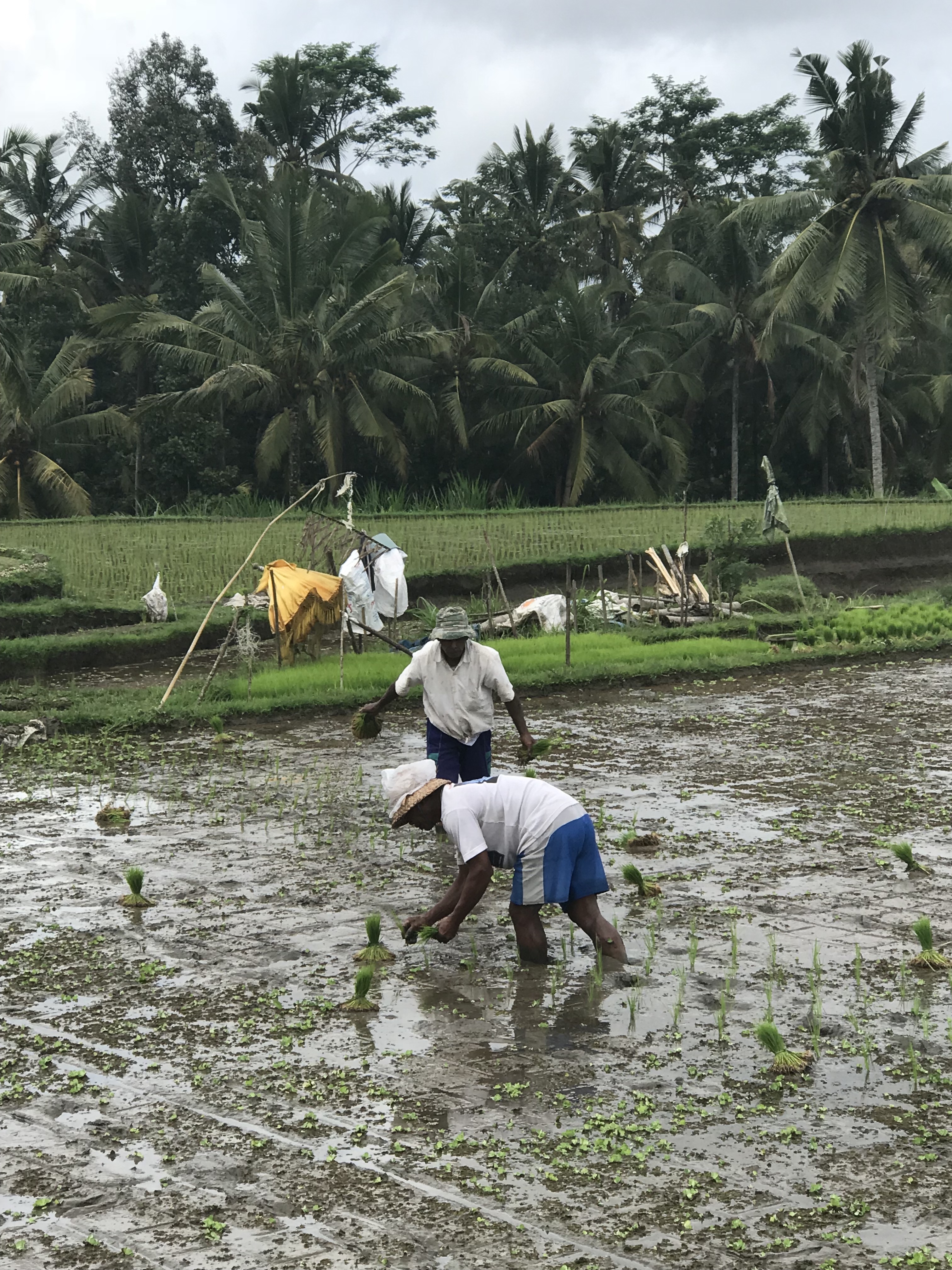 Our two final stops were rice related. First of all, we stopped at a family paddy where a father and son were planting the new crop - they will get three harvests a year.  All of the paddies in this area were family ones - each family having a carefully marked off area with the larger area  of terraces, each new area delineated by a small shrine.  It was hypnotic to watch - each new plant inserted roughly 10 cm from the last one, creating a perfect row of baby rice plants. The next and final stop was to watch a man preparing the paddy for the new crop.  He had embraced technology and was using his "Japanese Cow" - a noisy, petrol powered rotivator!

Our cycle ended at a tranquil point on a river.  Mildly distracted by a truck which had tried and failed to cross the river, beaching instead on a sandbank, we said our goodbyes to Bagoes.  We had had a fascinating insight into the traditional way the communities high above Ubud lived, farmed and died.  While we could have done without the spiders, it was an experience we felt privileged to have had.  Thank you Bagoes for being an exceptional, sensitive and knowledgeable guide. 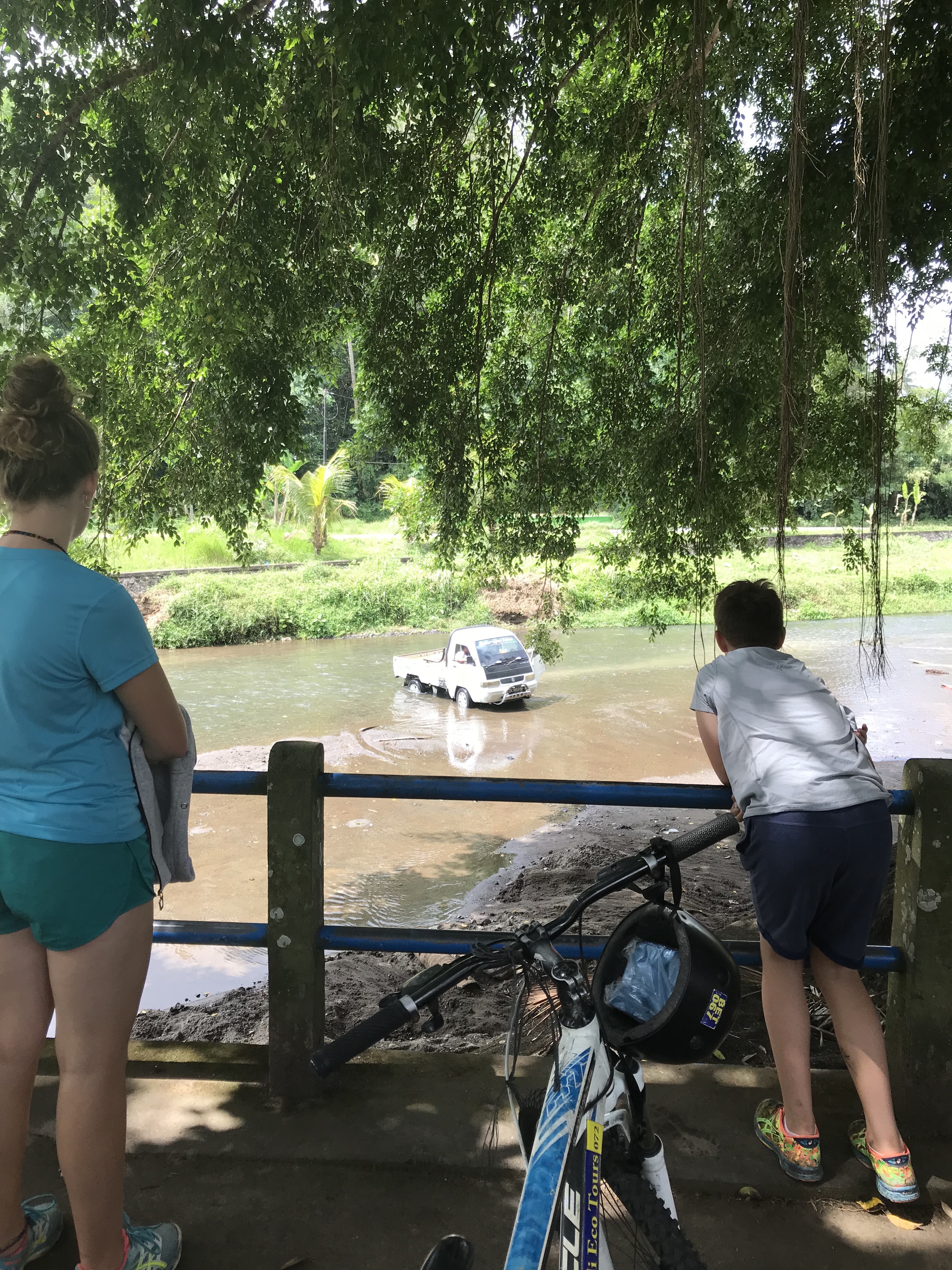